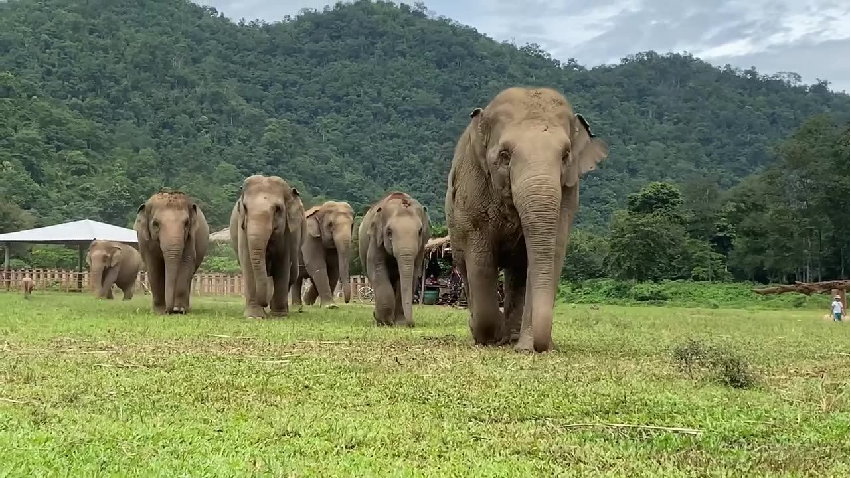 Seeing elephants up close is one of the main attractions in Chiang Mai, northern Thailand. What few people know is that many the elephant rides or “Elephant Camps” do not treat the animals with the affection or care they deserve. After researching a lot, I chose Elephant Nature Park. The sanctuary takes care of about 45 elephants. Most of them were rescued from some risky situation or abusive treatment. There are no shows or elephant rides there, but there is love and care. One of the most fantastic experiences of my life and something not to be missed for anyone going to Chiang Mai!

The Right Way To Approach Elephants 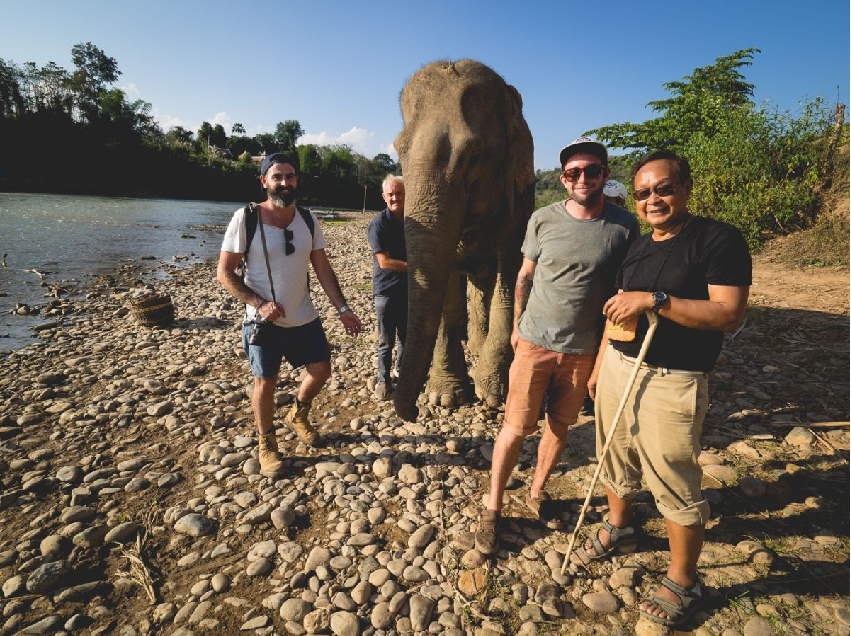 Elephants are wonderful, caring beings that have an amazing connection with humans. But it is worth remembering that they are animals, big, wild and that in the case of this refuge, they suffered some trauma and human abuse. One oversight is enough for a fantastic experience to end badly.

So, before any contact with the animals, we watch a short film that tells some very important rules:

Our first activity of the day was feeding the elephants. They come to a high porch and receive their food one by one. The elephants are separated from us by a metal grate, but when it comes to food, the damned use their long trunks to get as close as possible and gradually grab watermelons, pumpkins, bunches of bananas, and pineapples.

Elephants eat 10% of their weight in food every day. (Imagine the volume of that in fruits and vegetables!?) With this voracious appetite, they spend a good part of the day devouring these delights that are carefully cut and distributed in baskets for them.

It was nice to learn that each elephant has a specific food bowl with the food they need or can eat. Some elephants have no teeth, others have stomach problems, and the food can never be mixed.

Strolling Through The Park

After feeding, our group (about 10 people accompanied by a guide) went out to walk around the park and meet some specific elephants. We know Elly (I think that’s how you spell it, a female who was blinded from getting punched in the eyes for refusing to work. She was a walking elephant and besides being blind in both eyes. Her back is bent from carrying so much She is super docile and lets us get close and pet her.

During the day, we got to know and discover the sad stories of many of the park’s inhabitants. Some landmine victims have an invalid leg, many with spinal problems, elephants without teeth (which in the jungle means death, because without chewing they cannot live), and so on.

Upon arriving at the park these elephants take time to rehabilitate and be able to live with people and other elephants. Elephants naturally unite and form small herds (the funny thing is that there is a small rivalry between the herds and from time to time there is a little fight.

Without even noticing the time passing, it was lunchtime (this time, our lunch and not the elephants). A giant and delicious vegetarian buffet with a thousand options beyond delicious. The park’s food is well above average for normal tourist attractions.

After lunch, there is an optional film session. The film shows some of the harsh realities of walking elephants in Thailand and the abuse that the animals suffer when “being domesticated”. The film is hard, a real punch in the stomach of someone who spent the morning laughing and having fun with such wonderful creatures.

This film also shows some of the histories of the founder of Elephant Nature Park, and how she uses love and care to train and care for the park’s elephants. A history of struggle full of achievements. I got emotional.

At the end of the film, we follow the bath of a family of four elephants. They entered the water slowly and gradually gained depth. While the “father” elephant immediately tried to get in and sink, the calf was playing with the water to and fro and the female lazily waited for the mahout (caretaker) to bathe her with the help of a bucket. Coming out of the water there was a mother & cub moment. It was beautiful to see the affection that the mother has for the puppy.

Cleaning elephants is short-lived. As soon as they get out of the bath, they immediately try to get dirty with as much mud or sand as possible. The sand serves as a kind of sunscreen and insect repellent. Watching the ritual is almost as cool as watching them bathe.

Bath In The Elephants

And finally, the moment I had been waiting for most of the day arrived. Time to help some older elephants bathe. We went into the river with a couple of elephants. And throwing buckets and buckets of cold water on their backs. One of the elephants even tried to escape the bath, but the caretaker tried to put the damn thing back inside so we could finish the bath. After the water, we take very rough stones and rub them on the elephants. This rub helps the elephants that have skin problems.

Luck Knocked On My Door

And to close my day with a flourish. I was super lucky to meet the founder of the park, and have a brief chat with her. The love and relationship she has with elephants are incredible. Too beautiful!

And To Close The Day

We ended the day by feeding some more elephants with generous halves of watermelons! Go appetite!

Although it is not mandatory for anyone traveling to Thailand. As it is a place with a very different language, culture, and customs. It is better to avoid some difficulties that may arise. Can you just imagine wasting an entire morning at the airport to sort out “cucumbers” for lost luggage? And if you manage to get out of the airport “unhurt” but you have that food poisoning from exotic foods…better not to risk it!

We suggest that you take out insurance with good coverage that covers everything on the spot. So we recommend and do not travel without insurance from Seguros Promo. A Brazilian company that works as an insurance comparator, seeking the best cost-benefits on the market without giving up. excellent coverage! Make your quote here and enter the discount coupon IDEIASNAMALA5 to get 5% off your travel insurance purchase!

You may also be interested in How it affects the length of the cranks of a bicycle?

FROM NOWHERE TO THE TOP: RIVERFRONT RESIDENCES

What is the correct position on a bicycle? Avoid injuries like this

Getting used to riding a bike with the correct posture is essential to avoid knee,…