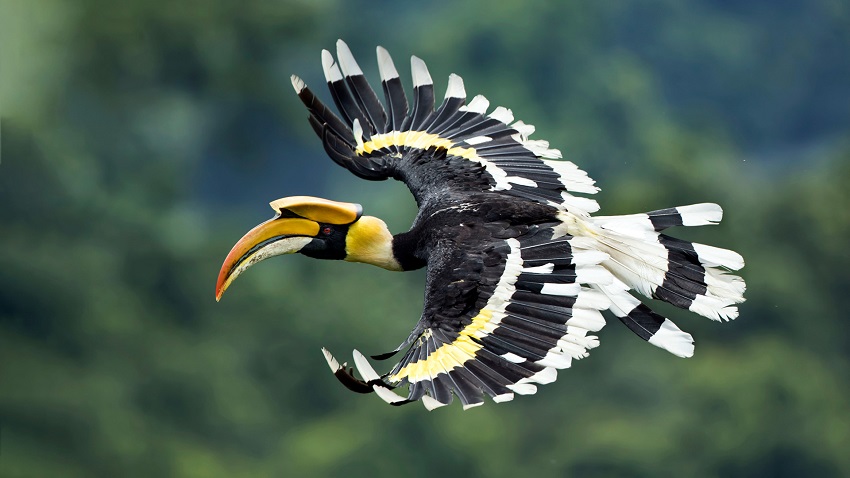 The hornbill is a large bird native to the jungles of northern India to the Malaysian peninsula. This specimen, with the scientific name Buceros bicornis, has a unique appearance.

It belongs to the Bucerotidae family, in turn, included in the Bucerotiformes order, and represents the culture of some South Asian countries, where it is considered a national or regional bird, although it is a species that is threatened by poaching.

Physical Characteristics Of The Hornbill 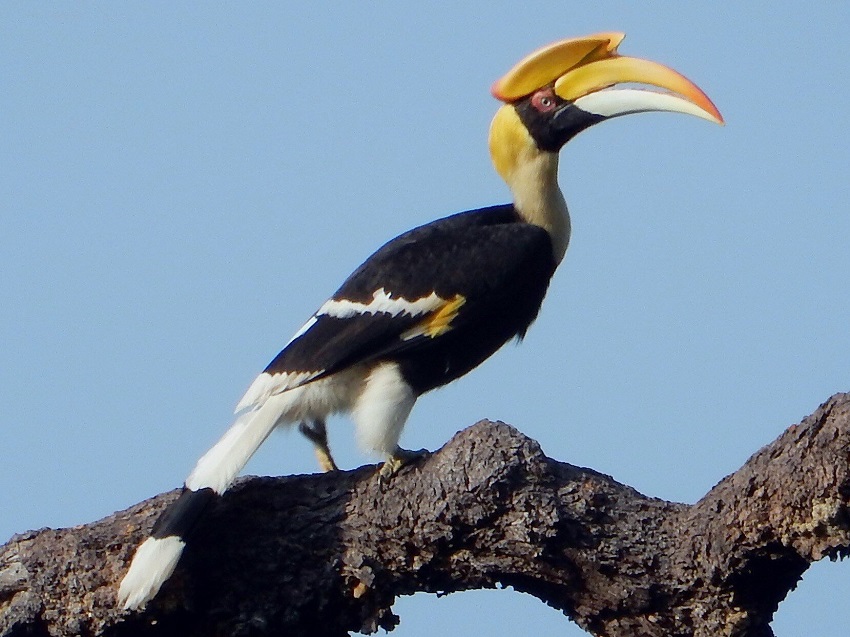 The hornbill is a bird of significant size, reaching 120 centimeters and a considerable wingspan of about 180 centimeters. They have a basic black plumage all over their body, except for their wings that have white covert feathers, as well as the tips of the primaries and secondaries. The neck plumage of this species is white, but it naturally turns yellow or reddish during grooming times, due to the oily secretion of a gland located at the base of its tail.

It has a large yellow beak and, in the upper part of it, is its most distinctive feature, a protruding structure with a porous or hollow interior, which gives it a very primitive appearance. This structure can be used by males to compete with other males in defense of the territory.

Males and females do not have distinctive marks that define a rigorous sexual dimorphism, however, they can be differentiated by the color of their iris; in the case of males, it is reddish, while the females show it in white.

Habitat And Distribution Of The Hornbill

These large birds make their nests in large trees, preferably old trees that usually have natural cavities in their trunk. They prefer forest species with great vertical growth. They also seek that the cavity used as a nest is above the forest canopy.

Hornbill usually inhabits pristine forests, far from intervened areas and from all human activity, so they are usually very shy and difficult to observe birds.

Geographically, the is found in northern India, the Malaysian peninsula, and Indochina, all the way to the island of Sumatra.

The diet of Buceros bicornis is mainly composed of fruits of the forest, preferably found in the canopy of the forest. They have a preference for fruits that are high in lipids. They forage over large areas of land.

The bicornuate hornbill has been described as a monogamous bird, with a seasonal reproduction period, between the months of February and May.

The method of reproduction is very peculiar. Before mating, they choose a tree that they will use year after year. This large tree should generally be taller than the forest canopy. And with a cavity large enough to accommodate the female and her chicks.

Once they mate, the female moves into the cavity of the tree. With their feces and remains of other materials, the female and male of the species seal the entrance to the nest. Only leaving a fine groove through which the male will provide food to the female and initially to the chicks.

The female, in this incubation period, makes a complete molt of her plumage. Hatching has an average of about 40 days. At 4 weeks after hatching, the female leaves the nest to join the male in foraging for their chicks. The brood is made up of 1 or 2 chicks per season. Over two months they can become independent from their parents.

On the IUCN list, Buceros bicornis is classified as vulnerable. Hunting and habitat disturbance (deforestation) are the main threats.